Many times aging structures are viewed simply as 'old.' We pass them every day without realizing the unique treasure that lies before us. Such is the fountain in the Washington Cemetery. Records indicate that this fountain was erected in 1892. Originally it was situated on Section 4 where it could be seen by all entering the front gate of the cemetery. In 1904 it was moved to the lake area in the center of the cemetery. Here the fountain was surrounded by gardens and walkways. It became the center for many activities including memorial celebrations and family outings. 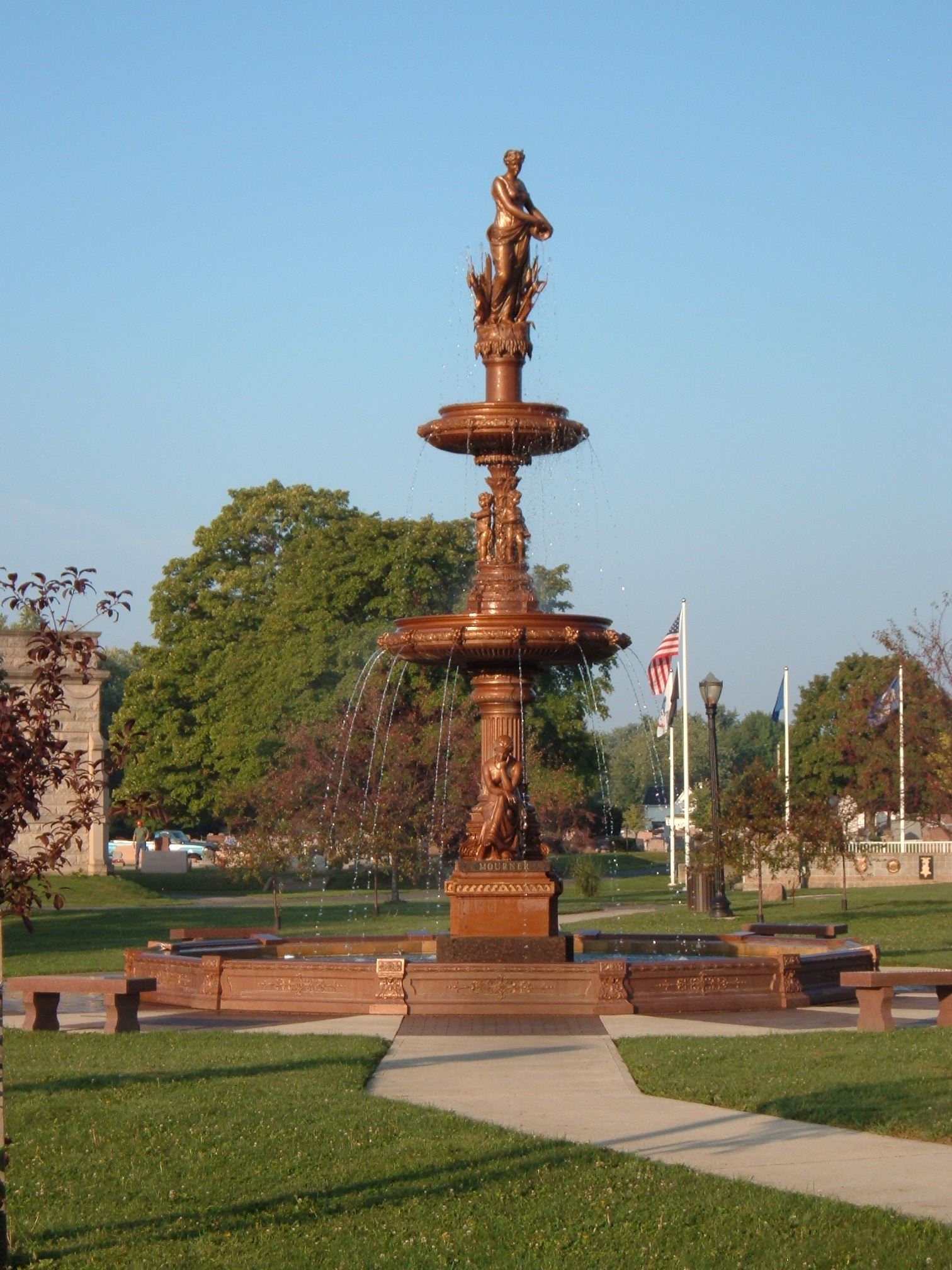 The fountain was originally purchased from the J.W. Fiske Company, perhaps after Washington residents saw a similar fountain in Lancaster. The Lancaster fountain - a zinc structure was purchased for a cost of $3,215. It was installed and dedicated in the Lancaster community square in 1890. According to reports the old fountain is a replica of a fountain in Etain, France. Another copy is in Halifax, Nova Scotia, Canada. It was installed and named the Diamond Jubilee Fountain in honor of the years of Queen Victoria's rule in Halifax.

Perhaps the Washington Cemetery Fountain was not a replica of another but an original designed specifically to grace our cemetery. Upon asking Mr. Karkadoulias, who is knowledgeable on Greek mythology, if he felt there was a meaning to the figures on the cemetery fountain, he replied:

"In my opinion the two bottom statues represent women who are 'mourning in grief' for the loss of friends and relatives. The three cherubs on the second level are the angels who are the messengers between the Lord and the women in mourning. The lady on the top of the fountain is soothing the pain of the women on the bottom by pouring or sprinkling water on them. The lady can also be the 'Lady of the Healing Water'. The water is healing the wounds of the body and soul and nurtures the soul and the spirit of man."

Very few of these early Fiske fountains are known to have survived to this day. In fact the Karkadoulias Bronze Art Company, which specializes in restoration of these fountains has acknowledged their awareness of only 5 similar fountains. The Karkadoulias Company restores the fountain in Lancaster in 1986, and has the molds and specifications of the Washington Fountain, which will enable the company to renovate the fountain to its original elegance.

The fountain was removed June 2, 2002, and transported to Cincinnati, where it was rebuilt and refurbished on the inside as well as on the outside. The paint and decay will be removed, the structure was strengthened, and the triple fountain water system again graces the heart of the cemetery. The fountain returned to the Cemetery in the spring of 2003. Once again visitors are able to enjoy the beauty that once graced the area between the Judy Chapel and the Washington Mausoleum.
[]